Also referred to as Clarkson case. From the Naval weapons website a definition  “British propellant charge container.  These were flash proof containers for bag charges (cartridges).  Charges were placed into these containers before they left the magazines.  The Clarkson’s Cases then rode up the hoists to the guns where the charges were removed only when it was time to load them into the breech.  The Clarkson’s Cases were reusable and were returned to the magazines for reloading.”

Which leads on to the first question. What is cordite? This entry from wikipedia is a good start.
” Cordite is a family of smokeless propellants developed and produced in the United Kingdom from 1889 to replace gunpowder as a military propellant. Like gunpowder, cordite is classified as a low explosive because of its slow burning rates and consequently low brisance. These produce a subsonic deflagration wave rather than the supersonic detonation wave produced by brisants, or high explosives. The hot gases produced by burning gunpowder or cordite generate sufficient pressure to propel a bullet or shell to its target, but not so quickly as to routinely destroy the barrel of the firearm, or gun. Cordite was used initially in the .303 British, Mark I and II, standard rifle cartridge between 1891 and 1915; shortages of cordite in World War I led to United States–developed smokeless powders being imported into the UK for use in rifle cartridges. Cordite was also used for large weapons, such as tank guns, artillery and naval guns. It has been used mainly for this purpose since the late 19th century by the UK and British Commonwealth countries.” So the name comes from it being constructed in “cords”. This photo shows what the cordite looks like. 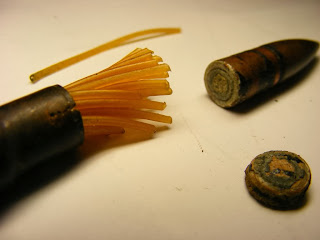 That probably helps explain the construction of the buckets. Its use dictates its construction. The body is made out of cork covered on the inside in canvas and the outside in leather. The handles and straps which are sewn are fixed to the body using copper rivets. So why these materials ? Basically they are “fit for purpose.”
Cork is naturally fire resistant which is well suited to the safety angle of what is being contained and its light weight will be a bonus in making it easier to move around.
The leather is used to cover the cork as the hide can be wet , stretched and glued on meaning it will shrink on drying giving a tidy, tight finish.

The canvas is purely used on the inside to seal the cork and on the outside to do this but also to provide a good surface to glue the leather on to.
Copper rivets and the plate supporting the handle on the inside provide a strong fitting and are used because the metal will not give a potentially lethal spark. The cordite cases would be used to transport the charge from the magazine to the guns.

So what do the marking’s mean. Lets look at this example:

N for Navy. B.H.&G. Ltd shows it was made by Barrow, Hepburn & Gale of Bermondsey, London. No 65  could be a size number and the III its mark. See diagram below. Possibly, all the cordite buckets were numbered and may even have corresponded with a specific gun?  This book the Handbook of Ammunition from 1945 gives a lot of answers and has this image showing cordite buckets. 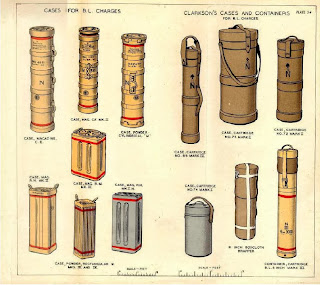 No signs of a stenciled armorial which I am sure were added later when they were decommissioned and sold off as umbrella stands and waste paper bins.

Thanks and credit to Simon Clarke for the above

Many of these buckets have subsequently been used as umbrella stands or waste paper bins, but this particular carrier lends itself perfectly for storage of your favourite bottle of Pusser’s Gunpowder Proof Rum. Up Spirits..